I have spent many years looking at Mt Hutt without ever having been up there, so with David having access to the key of the road gate, this was not an opportunity to be missed.

Two carloads of us, nin

e people in all, plus an assortment of bikes, therefore drove up to the ski field car park. There was a bit of snow present, but not enough to cause any problems, and we gradually zigzagged our way up onto the upper slopes which were surprisingly devoid of any vegetation. Justine’s boy, Conan, was a reluctant starter, and mum had to spend a lot of time coaxing him along. My sister, Margaret, who lives in Tasmania was surprised at the broken nature of the under laying rock, so she spent a lot of time trying to keep her balance. (Tasmania consists of nice firm dolerite). Anyway, lunch was enjoyed at the top of the lift tow looking down onto the patchwork of farming of the Canterbury Plains. A perfect autumn day. 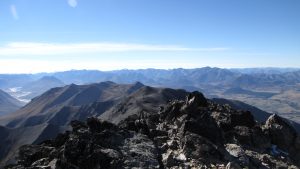 The summit was still away off to the northwest, so a short descent took us down onto the long summit ridge. Good views of the upper Rakaia from here, familiar territory for David from his mustering days. Towards the top the going was nasty-looking and steep, so most of us chickened out, but David was not perturbed, he just stuck his pole in, mustering style, and ascended the awkward gut, so he reached the actual summit. The return was without incident, and we reached the car park at about 4 o’clock. All was not over for some of the party, though. Christine, Justine and her three children donned biking gear, and pedalled (or freewheeled) down the road, with the cars following behind to pick up the pieces where necessary.

This trip was performed in the nick of time, as a few days later there was heavy rain and snow, that would have fouled things up. Those present, David, Christine, Catherine, Justine and three children, Margaret and Robert. 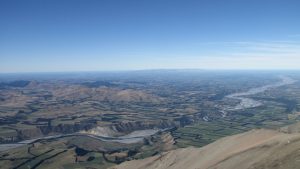 This entry was posted in 2013, Trip Reports and tagged 2013, Mt Hutt. Bookmark the permalink.